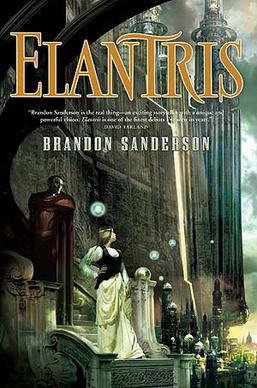 Elantris was the capital of Arelon: gigantic, beautiful, literally radiant, filled with benevolent beings who used their powerful magical abilities for the benefit of all. Yet each of these demigods was once an ordinary person until touched by the mysterious transforming power of the Shaod. Ten years ago, without warning, the magic failed. Elantrians became wizened, leper-like, powerless creatures, and Elantris itself dark, filthy, and crumbling.

Arelon’s new capital, Kae, crouches in the shadow of Elantris. Princess Sarene of Teod arrives for a marriage of state with Crown Prince Raoden, hoping — based on their correspondence — to also find love. She finds instead that Raoden has died and she is considered his widow. Both Teod and Arelon are under threat as the last remaining holdouts against the imperial ambitions of the ruthless religious fanatics of Fjordell. So Sarene decides to use her new status to counter the machinations of Hrathen, a Fjordell high priest who has come to Kae to convert Arelon and claim it for his emperor and his god.

But neither Sarene nor Hrathen suspect the truth about Prince Raoden. Stricken by the same curse that ruined Elantris, Raoden was secretly exiled by his father to the dark city. His struggle to help the wretches trapped there begins a series of events that will bring hope to Arelon, and perhaps reveal the secret of Elantris itself.

DISCLAIMER:
This book was bought by me and reviewed by choice.

Elantris is such a great way to dip your toes into Brandon Sanderson’s “Magic with Rules” magic system that resise within the Cosmere. If you haven’t read any of his works and are intiminated by the massive size of later novels, this or Warbreaker is a good place to start!

I absolutely love this book. This is Sanderson’s first published novel and it does not disappoint. This book focuses on more political intrigue rather than the magic system (which I found so interesting and would love to learn more!) I enjoyed the re-imagined idea of zombies as well! When my friend Jess (@wildbookbabe) said this was a book about zombies, I was totally intrigued.

This story follows three narratives in third person (see the synopsis for Raoden, Sarene, and Hrathen motives). While there is a lot of world building, the character driven plot is what really brings this story together. Roaden is a huge cinnamon roll, Sarene is a strong, fierce, intelligent woman, and Hrathen is… well.. you’ll find out! The mystery surrounding the Shaod in Elantris will keep you turning page after page! Much like most of Sanderson’s books, this book does not have a ton of romance, but it does have a star-crossed lovers trope (which is my favorite!)

If you read this book, let me know!! It’s such a fun and exciting book!