I sat and stared at the ceiling after the ending of the Hero of Ages. That was one of the most shocking endings of all time. It took me a while to get used to the idea of another set of allomancers, let alone in what I felt was a Western setting. I thought, “there’s no way in freaking hell I will like this… I will miss the original trilogy so much.” While that statement is true, me not liking it was totally false. Era 2 was SO MUCH FUN! It was completely different from what I was expecting. They were much shorter but still had the ability to capture me, surprise me, shock me… I really enjoyed this era and I cannot wait for the Lost Metal!

This review will be somewhat different because I am reviewing the series as a whole. I don’t want to post anything spoilery because, well, that’s what the Mistborn Wiki is for! I held back and didn’t look at anything for Era 2 because I had a super amazing support group while I read this series so my questions were asked more or less as I went along. When I finished this series, I did go and check out some stuff I forgot as I read it.

I also want my friends to be able to read this review and not feel spoiled. 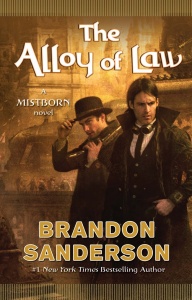 The Alloy of Law is the first book set 300 years in the futu re from the Hero of Ages. We are introduced to a Twinborn, Wax, an allomancer and a feruchemist who can utilize these powers separately, and together. Wax was a lawman out in the roughs and has come back to what is now called Elendel to rebuild his house name with a marriage/alliance. We are introduced to his friend from the rough, Wayne. He is also Twinborn and is the best comic relief in history. He is funny, impulsive, slightly dim, while Wax is very calculated, smart, and loves to follow the law.

In this book we follow these new characters as a rebel group begins kidnapping women for an unknown purpose and Wax and Wayne and their new squad begin to investigate these mysterious happenings. This book is packed full of action and an entirely new idea built on top of the old magic system! It did take me a little bit to get into, but once the new world building and character building started to flow, I couldn’t put it down! 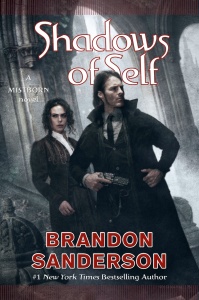 Shadows of Self, just like the Well of Ascension, did not fall trap to the second book syndrome. I was totally in love with the story from the start. Once again we find our heroes Wax and Wayne, as well as the new squad dealing with an unsteady and corrupt government. As they try to figure out now to navigate the political structure that is still controlled by noblemen oppressing the poor and the unemployed, Wax must find a way to protect important government officials before the city of Elendel erupts in choas.

This book seriously surprised me. We find some old friends in this novel, and that made me scream with joy (I can’t wait for you to figure out who it is!). The action was there as well as the story line. I never felt bored or disappointed. This was a solid second book in this series! The Bands of Morning was probably my favorite of the three mainly because there was so many callbacks to the original trilogy. The way that Brandon Sanderson is able to tie in the old books without it feeling fake or forced is beyond me.

In this book Wax and Wayne must explore the meaning of the mysterious Bands of Mourning before whatever it is falls into the wrong hands. Wax, being his amazing law abiding and just self, cannot keep himself from righting wrongs. We are introduced to even more building upon the magic system, so it’s important to read the series from start to finish, from the original trilogy onward. As with the previous books, the action was there, the banter was there, I loved it all!

I don’t want to say to much about this series because I don’t want to be spoilery, so a lot of the facts I got from what is available in the synopsis! Like the Final Empire, the Alloy of Law can be read almost as a standalone. I really enjoyed this series and I am looking forward to the next novel, the Lost Metal in 2020/2021!