Once I binged the Mistborn series, I was then able to read the novella and short stories associated with the series. I was told by my friend Jess (@wildbookbabe) not to read Mistborn: Secret History until I was done because it had MAJOR spoilers for the original trilogy and some for Era 2. BOY WAS SHE RIGHT! I literally cannot say anything about Secret History because… well.. it’s a secret! But what I will say is that the REWARD for finishing the series as a whole and then reading it IS WORTH IT! It also broke me in the BEST way!! *cries* 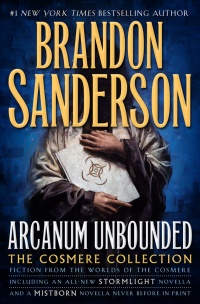 The short stories (and Secret History but you can buy SH as it’s own book) are located in Arcanum Unbounded which is the novellas and short stories within the Cosmere. The first being the Eleventh Metal, which gives us a little backstory on Kelsier and what he was like while training. I do recommend reading the original trilogy first before this story.

The last short story is Allomancer Jak and the Pits of Eltania. This story is HILARIOUS. It’s told by him and edited with footnotes by his Terrisman steward. Jak is an adventurer and has sent in these stories for people in the Alloy of Law era to read in their newspaper as almost like an on-going weekly drama. We find out some CRUCIAL information on some of the magic system so it’s definitely worth reading when you finish era 2!